Issues of Succession and Validity

On the 12th March 1931, to the question put to them by an RC priest, “An Ecclesia Libero-Catholicae validi sunt titus et ordines?” – are the sacraments of the Liberal Catholic Church valid? - the Roman Congregation of Rites replied in the affirmative. It further recommended that “members of the so-called Liberal Catholic body should be treated according to the special instructions of Pope Leo XIII to Cardinal Lavigerie, regarding the Eastern schismatics.”

These instructions were sent by order of the Pope in 1882 to Cardinal Lavigerie, Archbishop of Carthago, by the Special Congregation of the Propaganda for the Oriental Rites. They read as follows, “With regard to the Eastern Schismatic Christians. Your Eminence should impress upon his clergy the fact that their foremost two feelings must be: love for the individuals and respect for their rites. For the Schismatic Christians are our brethren, baptized with us in the Blood of Jesus Christ. We therefore must ever have for them “Bowels of compassion”, as the Blessed Apostle Paul puts it, and always be willing to show them our loving-kindness…Let your Clergy therefore never despise or slight their ways and uses, their language, or their Liturgy, which Holy Church approves of as being quite just and rightful.” [Mgr. Bernard Cardinal Lavigerie, Paris, 1896, vol. 1, p 86; vol 2, p 98.]

Of course we do not accept that the Eastern Churches - or we are ourselves - are schismatic, but believe rather that Rome broke away from Orthodoxy at the Great Schism, however, with respect to the RC Church we are in much the same position as members of the Eastern and Oriental Orthodox churches. Additionally the ordinal we use is proven to be essentially orthodox and our intention in ordaining is to do as the church as always done from time immemorial, "quod ubique, quod semper, quod ad omnibus". See also The Holy Celtic Church. 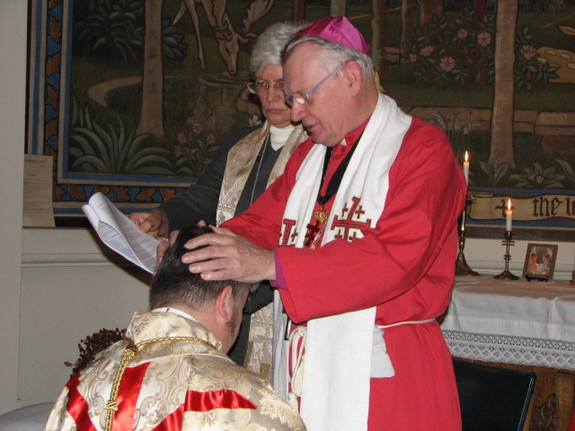 "The ordinary minister is every consecrated bishop and no one else [Council of Trent, sess. 23, c.7.]. Therefore even a schismatic bishop or one who has been degraded or one who has been declared irregular, etc. may ordain validly, provided that his own consecration was valid and that he uses the essential matter and form." Handbook of Moral Theology, by Dominic M. Prummer, O.P., page 383, The Minister of Valid Ordination.

"When a Catholic sacred minister is unavailable and there is urgent spiritual necessity, Catholics may receive the Eucharist, penance, or anointing from sacred ministers of non-Catholic denomination whose holy orders are considered valid by the Catholic Church. This includes all Eastern Orthodox priests, as well as priests of the Old Catholic or Polish National Church." Rights and Responsibilities, A Catholic's Guide to the New Code of Canon Law, Thomas P. Doyle, O.P., page 44.

"A validly consecrated bishop can validly confer all orders from the minor orders to the episcopate inclusively ... For this reason the ordinations performed by the bishops of the Old Catholics are considered valid." A Practical Commentary on the Code of Canon Law, revised and enlarged edition, by Rev. Stanislaw Woywod, OFM, LLB. Vol. 1, Sec. 881 P. 558.

"Their [Old Catholic] Orders and Sacraments are valid." A Catholic Dictionary, by Donald Attwater. The Far East Magazine of June, 1928, published by the Saint Columban Fathers of St. Columbans, Nebraska, in reply to an inquiry about the Old Catholic Church, published the reply that: "These [Old Catholics] Orders are valid."
"The Roman Church recognizes the validity of Old Catholic Orders and other Sacraments." 1974 Catholic Almanac, by Felician A. Roy, OFM, page 368. "Our Sunday Visitor."

“Every validly consecrated bishop, including heretical, schismatic, simonistic or excommunicated bishops, can validly dispense the Sacrament of Order, provided that he has the requisite intention, and follows the essential external rite (set. Certa). Cf. D 855, 860; CIC 2372.”  1952 Fundamentals of Catholic Dogma by Dr. Ludwig Ott, pp. 456.